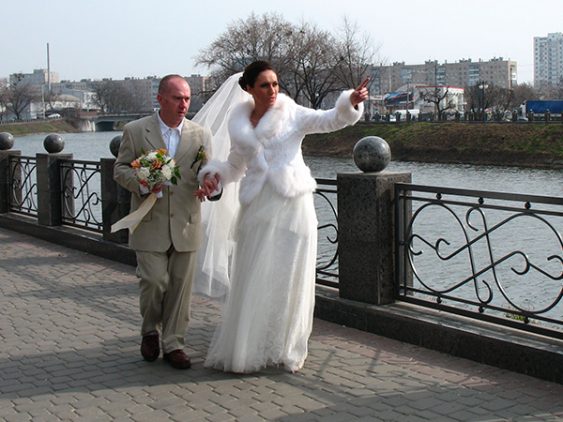 My name is Francis. Gentlemen who read these lines and look for an agency to find the woman who suits you in the east, be well aware of one thing………. “In the heart of the east” is for the moment the only marriage agency in France whose interest is to find you quickly shoe at your feet, the sooner Kateryna finds the woman you are looking for, the better she earns a living……….. it’s as simple as that….

All other agencies sell you an address book and their partners make a living by making the fun last………. including correspondence (because you pay by letter…) Trust Kateryna (even if sometimes it’s special…)and keep in mind your goal, correspond for some time to “get down” and make the trip, a meeting “live” of a few minutes will tell you more about the person than months of correspondence ….

In short, since adolescence I have always been more attracted to foreign girls (and women than to the “locals”, I have also lived more than 13 years with a British woman who did not speak a word of French when we met…. then I met French women but there was always something missing in the relationship.

I went through several agencies and dating sites to find the nice and positive woman with whom to start a family. At the beginning of 2012 I decided to register in a matrimonial agency specialized in the eastern countries, I go around the subject and register in the one that seems to me the best and that has gable on the street ……… It’s not great, once the subscription is paid, I am delivered to myself and thrown in pasture to local agencies in Ukraine that are only there to strip you of some euros, I travel to Dniepropetrovsk in May to meet correspondents ………. I already knew a lot about Ukraine but now I really feel like I’m being taken for a cow to milk and the local agency is happy …… if the goal were still achieved…….

At the end of the summer I let go of the agency, and set out to hunt for another Franco-Ukrainian agency. Careful! marriage agencies in Ukraine, it’s really the jungle…. and by chance, I come across Kateryna’s agency, the concept of the individualized and precise approach, and the good knowledge of all Ukrainian clients and members seems to me to be exactly what I was looking for !!!!!

Besides, at first I do not believe and contact Kateryna by phone to find out a little more, I am seduced and register to her agency, I follow his advice and quickly the noose tightens on some correspondents including Karina, it was Kateryna who had strongly insisted that I correspond with her. His profile did not inspire me more than the others at the base, but during a quick interview with Skype via the agency, something attracts my attention, a strange, pleasant feeling, I felt really relaxed in his presence …

Direction Kharkov in December and meet with my correspondents, the feeling is confirmed, in the presence of Karina I feel good…….. I meet other correspondents of course, beautiful and intelligent women but it is with her that I feel best, I am not looking for a trophy to carry on my arm but the woman with whom I want to live and start a family….. It is posed, thoughtful, looks very (too) serious, but in fact it says a every 5 minutes…… But she does it with such seriousness and aplomb that my arms fall off every time (so I appreciate her humor…), the time we spend together with the performer is pleasant for everyone and I am entitled to a kiss the day before I leave….

Back in Kharkov in January to spend some time together, no or very few communication problems, a little English, a little Russian and French, we manage and we understand each other not badly, she is a great young woman, the taste of her skin is matched only by the softness of these lips and I’m glad I had the opportunity to meet her………. and at first she doesn’t seem disappointed to have met me either…;-) I plan to see her again in Kharkov during the winter, and bring her to France in the spring. She attacked the French. The new phase of my life begins, I finish the construction of my house, and I have lots of plans for both of us.

So Karina arrived late yesterday afternoon instead of Sunday, I had to pick up another ticket passing further south to avoid the bad weather……… we’ve been galloping all over the place today, there are a lot of things that are really worth a look in Barcelona, especially in terms of architecture…… tonight we were a little tired of running, so we made a paella on the port …… Nice… So we’re still here tomorrow morning and then we’re going home in the afternoon.

Everything is going well, the corner did not displease him … 😉 If the weather is not too rotten this weekend, we will take a ride to the ocean, it is not far and she would like to see Fort Boyard …. On the face of it, she’d be up for a CDI here with me 🙂 we’ll be able to think about organizing this….

I spent about ten days in Ukraine with karina in June, I met the beautiful family, girlfriends and everything………… we also went down to Crimea to spend a few days in yalta, it was simpa! we swam in the black sea in the middle of the jellyfish, it’s very romantic all these bottles in the sea ……… good there’s no messages in it……. (vodka)……… ukraine what …. :), it was nice, we stayed at the home and everything …… ate in a lost Tatar inn in the mountain overlooking yalta, etc. really simpa…

we re-study the trick, finally, no marriage in Ukraine……….. but here in France……….. so now we are attacking more seriously, the visa is in progress and she has recovered all the necessary documents….

I just wanted to keep you informed my dear Katerina, mission accomplished…. :)) We are bound by the bonds of marriage!

new career orientation also for me, chance (or fate …) brought me once again to Kharkov in the spring of 2014….. the project has since matured and officially starts in 2015.

karina has adapted well to life in France, at home we speak well on ukrainianrainorussoanglofrançais … 🙂
but she does well in French, she has made good progress in being here. she spends one day a week at one of my sisters who painfully articulates 5 words in English….. It makes him work his French:)

Video testimony made about this couple after 5 years of marriage. They now have two beautiful children: