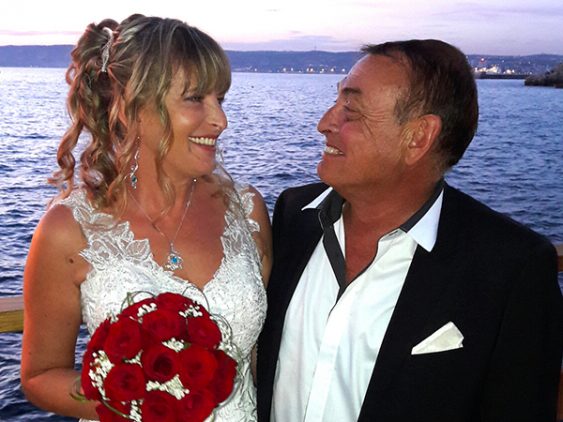 My name is Jacques and I am writing a beautiful story for you. After two marriages and two divorces with French women I wanted to see other horizons have another life. I signed up six years ago for a Russian marriage agency and I thought I found the woman of my life in The Person of Larisa. We stayed married for 5 years and it was 5 years of happiness, but another man stole it from me !..

I am a good player and I could not fight, but to keep a very pretty young woman you must first become aware of it and give him 100% of his Love and above all not be jealous of the eyes of others …….. In life you have to try your luck, you will not be robbed of a mummy! (and still can be an antiques dealer …………!)

After this experience I did not give up and in my mind the most beautiful women are from the east, not only beautiful but also sensitive and adorable and……………. I found Katerina’s agency because it is human in size unlike many other marriage agencies.

I went to Kharkov and met members who were showing their interest in me. The reception at the airport went very well and the interpreters are of good quality. I chose an apartment rather than the hotel but each one has its own tastes. My meeting with Eugenia was very intense then I met Tatiana, my preference was for Eugenia. You have to beat the iron that it’s hot and Eugenia came to see me in Marseille. We had a great time…………… but we realized that we weren’t meant to be together.

I have not given up hope and I have reconnected with Kateryna. I continued to meet other women much younger than me (women aged 38-40), despite Katerina’s insistence on meeting women aged 45 to 50. I remained on the idea that my last 6 “loves” were between 20 and 35 years apart with me, my ex-wife was 24 years younger than me and my concubine (official notified in town hall) before my marriage was 35 years younger. Simply because I am friendly, generous, affectionate, gentleman and have a lot of humor.

But that was before. Time passes and I told myself that in a few months given my age it is going to be difficult to find a pearl! Now I am 64 years old, and the attitude of these young women I was trying to seduce did not reflect any signs of love, and there was no question for these women to marry me.

Finally, I understood Katerina’s message and made the decision to become more reasonable and meet a woman between the age of 45 and 50. I totally put myself in Katerina’s hands and asked her to find my pearl !!!!!!!!!! It was there that she introduced me to Algelyka, a 47-year-old woman. As soon as I saw him at the airport, I realized that the current was passing between us. His stay was nothing but happiness and love. She is a very pretty woman and better suited to my age and lifestyle. Angelyka is a lovely woman, a real doe, she’s a Love. We get along very well, it’s just happiness.

I am very happy and thank you, we decided to get married quickly, the file was accepted after two visits to the town hall! The bans were published and Angelyka chose September 3 for our wedding. We got married and we’re happy.

It was not easy but finally I found the woman of my dreams thanks to you . In life you have to go to the end of your dreams and the agency In the Heart of the East can help you meet the woman of your life. Thank you again for your good advice. I should have listened to them before.

Video testimony of this couple made 3 years after their meeting: