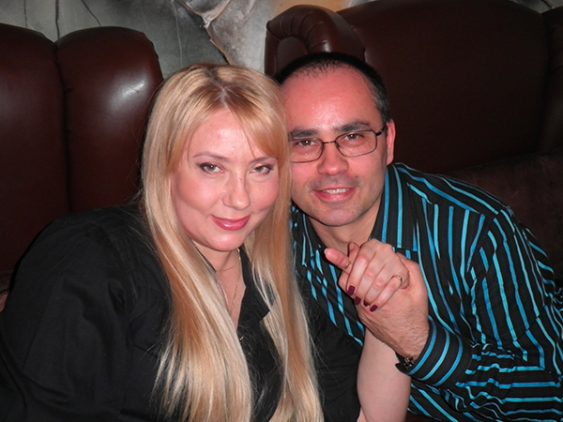 I thank a thousand times the whole team of Au Coeur de l’Est for the good work done together in less than six weeks to find a nice heart in Kharkov! Looking at the dating sites in the Eastern countries on the Internet, I found by chance Au Coeur de l’Est in Marseille, a very well explained site with several approaches to the customer’s choice to meet the members …

Kharkov, Ukraine. I filled out the contact form in December 2012. A week later, Kateryna called me on my cell phone and within half an hour I got all the information I wanted, and that’s when I fully trusted Kateryna for her work experience.

At Kateryna’s request, I choose ten women to meet, in return only half wanted to meet me, and this is where Kateryna by her knowledge of her members finds me another selection of women who wish to meet me. With all her confidence, I give Kateryna the approval and I decide to go to Kharkov at the beginning of February 2013 for the meetings to be carried out.

Very welcome to the airport with Andrei, Kharkov’s agency, to introduce me to the apartment in the city center, and very nice provision of well-equipped accommodation.

For meetings with women, I have a busy schedule with an interpreter. The first woman to meet is called Oksana, very beautiful woman and even prettier in real life than in the pictures. At first I stay focused, but after a while the current goes very well, and we stay three hours together talking. She’s a lovely, sweet and cheerful woman, and I’m charmed.

I do my next meetings, but everything goes very well with half the women and there, the hardest is yet to come: it is very difficult to make my choice between the five women that I liked the most, and with whom I feel the most affinity and vice versa, because they are all beautiful, beautiful, smiling, cultivated, and they have the joy of living! I didn’t sleep wednesday night to make my choice, but I still had that thought for Oksana…

On Thursday morning with the interpreter I only ask for an appointment with Oksana for Friday afternoon at 15:00. With Oksana, I felt good, I had a crush, we stayed together for six hours. So we celebrated our meeting six days before Valentine’s Day in a very good restaurant with the star-studded French chef from Kharkov.

I return to Oksana at the end of April 2013 to celebrate my birthday, and Oksana is committed to learning French to better understand each other. I write to Oksana every day by email, and I translate her emails by automatic translator on the Internet. Then she will spend her holidays in France to visit my region and Paris.

I thank the whole team for your good work and I will give you news as you go along with Oksana. I am very delighted with the experience I have just had where I had a pleasant time with your members in Kharkov. The city is very beautiful, so are the people, and so are the whole team of Au Coeur de l’Est!

Oksana has just spent 10 days on holiday in France. A lot of happiness. Visit Troyes, Provins (medieval city), Paris, where her sister from London came to join her to see her niece, two days in Saint-Tropez with Oksana by TGV, and a visit to a large champagne cellar in Epernay. Oksana adapted very well at home, and also with my son where they spoke in English and played chess. Oksana is a cheerful, smiling and lively woman. On April 27, 2013, I went to Kharkov at Oksana for 8 days. Receive with all your thanks, my greetings.